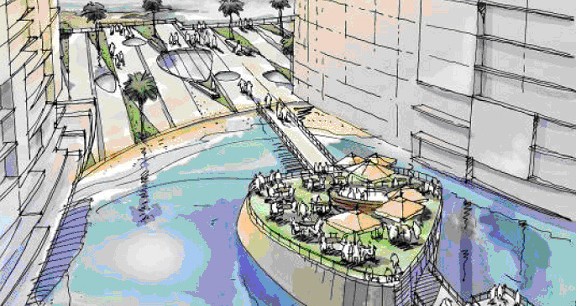 The proposed development is located at the former Corinthia Mistra Village Clubhotel, which ceased operations in 2004. The site comprises clusters of apartments varying in height between two and four floors extending over most of the site. Interspersed between the buildings is mature landscaping with roads and paths that allow pedestrian access throughout the site.

The Scheme provides for the construction of a residential complex comprising apartments, townhouses, retail floor space, amenities and underground parking. With the exception of the townhouses, the facilities will be accommodated in four buildings: three boomerang shaped buildings that are stepped up from 5 storeys to 13 – 14 storeys plus penthouses such that more apartments are afforded views in at least 2 directions, and a 19 storey tower.

The Scheme is located on the easternmost point of Bajda Ridge, overlooking Dahlet il-Fekruna, part of Il-Bajja ta’ San Pawl (St Paul’s Bay). It is a roughly square parcel of land with an area of 42,179 m2 located on the brow of it-Telgha tax-Xemxija at the limits of the village of St. Paul’s Bay. The site is accessed from the main arterial road that leads from Xemxija to Mellieha. The east, south, and south west boundaries of the site are adjacent to residential areas, mainly apartment blocks. It-Telgha tax-Xemxija is an arterial road; it has been identified in the Government’s Transport Infrastructure Needs Assessment (TINA) to be included in the Trans-European Transport Network (TEN-T).

The Environmental Planning Statement identified that extraction would likely cause the production of significant amounts of poor quality waste rock. Excavation would probably also increase dust levels in the surrounding area. Noise and vibration are likely to be a nuisance in light of excavation works. Wind speeds near some of the buildings within the Scheme are likely to pose a pedestrian safety risk in certain conditions. The change of view from Mistra Bay was considered to be of major significance yet the change of views in most areas was considered to be minor.

The Traffic Impact Statement demonstrated that the proposed development will have a major impact on the roundabout at the summit of it-Telgha tax-Xemxija and the links to the north and south. It shows that the roundabout fails during the weekend evening without the traffic from the Scheme and, when the Scheme is taken into account, the roundabout reaches saturation or fails during the weekday morning and evening peaks and during the weekend morning peak. In the event that through traffic is diverted from It-Telgha tax-Xemxija through, for example, the commissioning of the TEN-T bypass, the junction and it-Telgha tax-Xemxija (together with minor improvements) would be adequate to handle the traffic generated by the Scheme. In addition, in order to facilitate traffic flows and minimise the delays resulting from pedestrians crossing the arterial road, it was recommended that a pedestrian underpass be provided under the arterial road.

The redevelopment of Mistra Village was approved in June 2008.

Following the approval, Adi Associates prepared a Waste Management Plan (WMP) and an Environmental Management Plan (EMP).  The WMP was based on the waste management strategy included in the EIA and focused mainly on the excavation and construction phases of the project while providing a framework for the waste management activities during the operations.  The EMP aims to manage the environmental effects during construction works, ensuring that the proposed mitigation measures aimed at minimising the environmental impacts are put in place and maintained.